In late January 2 journalists and a camera man arrived at Davis. They had flown from Hobart via Casey  – Wilkins Runway.

They were here for 10 days to film a number of stories for 7:30 report, Catalyst and Radio National. On the 3rd of February I was fortunate to be boating crew for them for the day.  The first part of the day involved a trip to Gardiner Island where they filmed the Bird Girls – Anna and Phoebe, about their work with adèlie penguins 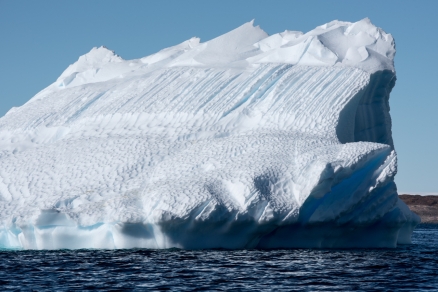 Iceberg on the way out to Gardiner Island 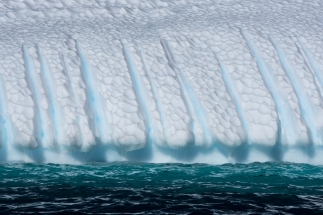 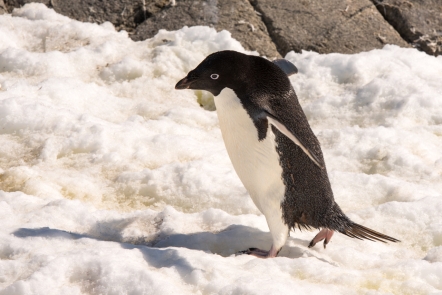 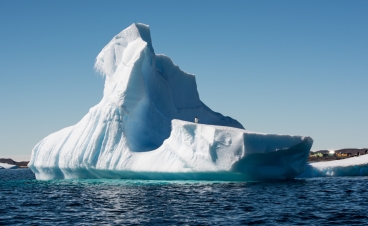 Whilst the ABC and Bird girls were filming on Gardiner Island Damien and I just cruised around the icebergs offshore. All of a sudden there was commotion near one of the icebergs. It soon became apparent that a Leopard seal was on the prowl. We watched in fascination as he flayed a adèlie penguin that it had caught. The following photos were taken with my 70 to 200mm lens.

An adèlie penguin looks on from the saftey of the iceberg as a leopard seal takes apart one his mates.

An opportunistic skua hovers around for a feed

This photo has everything – penguins, a leopard seal, a skua, Davis Station and even a blurred image of a helicopter in the left corner 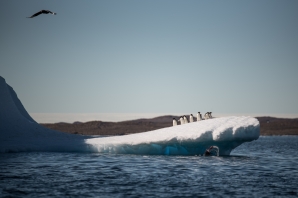 After the ABC and the Bird girls finished their filming, we picked them up and headed across to Bluff Island. The following pictures were taken as we slowly cruised near Gardiner Island. 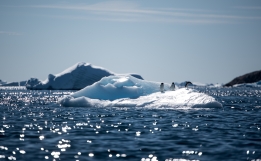 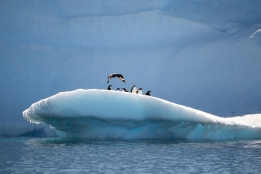 When we got to Bluff Island – we dropped off the ABC crew and Bird Girls. They hiked up to the top of the island to do another story on the data collected from the nesting sites of Cape Petrels on the Island.

Small iceberg on the way to Bluff Island

Cameraman Peter, gets footage of penguins 0n a ice floe 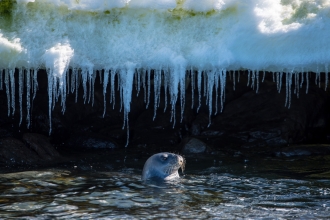 Anna, Phoebe and the ABC crew on top of Bluff Island

After the filming on Bluff Island we picked up the crew.  Though it was late in the day (5:30pm) and because the weather was still delightful, it was decided to go sightseeing around the outer iceberg field. There was some amazing scenes on the way.

It was quite surreal to be amongst the outer icebergs. There were some enormous, beautifully sculptured and weathered bergs.

It was after 6pm when we decided to cruise back to the station, Our skippers chose the most scenic route. After a long day we were back at station in time for dinner. 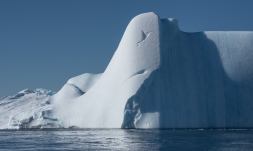 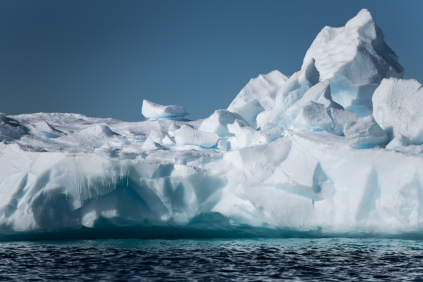 We were back just in time to meet, greet and say farewell to a large group of Indian expeditioners, from Bharati Research Station situated in the Larsemann Hills southwest of Davis. They had been visiting Davis for the day.

On Saturday the 4th we had a dress up party – come dressed as ‘the decade you were born in’. Later that evening I took a picture of the crepuscular rays on the western horizon.

The Indians arrived in another Kamov helicopter piloted by Ukrainian pilots

Kamov helicopter ready to transporting the Indians back to Bharati

Crepuscular Rays on the western horizon

We had a nice dusting of snow which made the station look very pristine. It also made it hard for the increasing population of Southern Elephant seals to blend in. 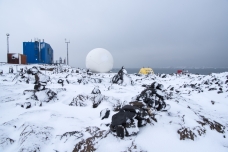 The elephant seal wallow down from the ANARE Satellite Dome

Southern elephant seals were arriving every day – They come ashore to moult in wallows. Some wallows have been in the same place for hundreds of years.

They are all males and they always seem to be annoyed with each other or maybe it is so uncomfortably itchy when they shed their fur. The mature male seals typically weigh 2,200 to 4,000 kg (4,400 to 8,800 lbs). 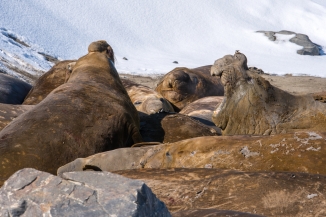 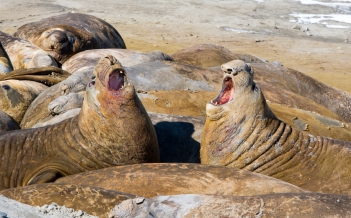 Our water supply comes from a small tarn (lake) just to the west of the station. Because the water from the tarn is full of salt and other impurities it has to be filtered.  During the summer months the water is pumped through (at very high pressure) a Reverse Osmosis Plant.

Station water in the blue tanks

There was a spectacular sunset to round off Valentine’s Day – 14th February.

More elephant seals were arriving each day. Also there were plenty of adèlie penguins around to keep us entertained. There was also another visit from a few Chinese expeditioners from Zhongshan. On Saturday the 18th, we had our “End Of Summer” formal dinner, which was topped off with another beautiful sunset. 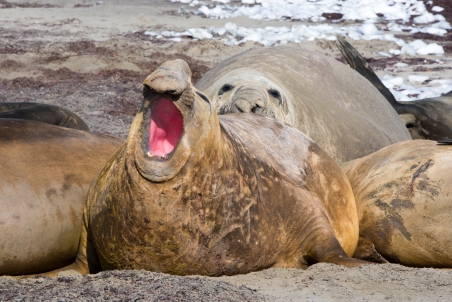 Elephant seals on the beach

A lone adèlie penguin on the rocky shore near the station

This adèlie penguin hasn’t quite lost its down feathers

Visit by the Chineses from Zhongshan 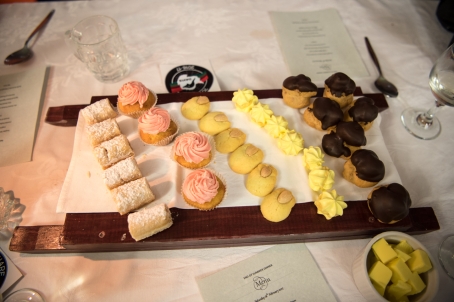 Desert for the “End of Summer” formal dinner

Days are getting shorter – sunset at 10:35pm

Reflections of the sunset

There was a dusting of snow overnight on the 19th then with the daytime temperatures rising just above 0℃ (32℉) the snow soon disappeared.

On the 21st the Aurora Australis (V3) arrived and anchored in Prydz Bay. It was a short re-supply and retrieval of the summer expeditioners. 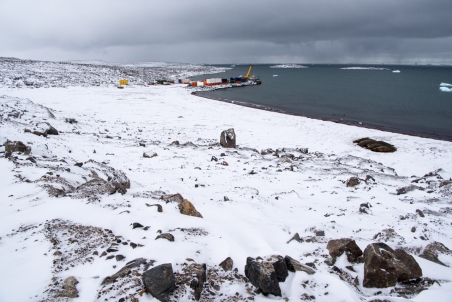 The elephant seal wallow on the beach in front of station

The snow dissapeared when the temperature reached 1.3℃

The Aurora Australis in Prydz Bay

With the Aurora Australis in port – it was a busy week. I took the following pics of the entertaining elephant seals on the beach.

There was also the logistics of loading huge drilling rig onto a barge for transport out to the AA. 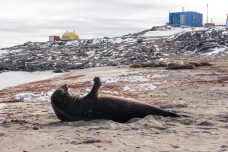 A Weddell seal that thought he was an elephant seal

Overnight on the 24th and into the morning of the 25th there was heavy snow. It made for a great photo shoot – so I wandered around station and out to Marchents Landing to take the following images.

The Laternula shells are found all over the Vestfold Hills. 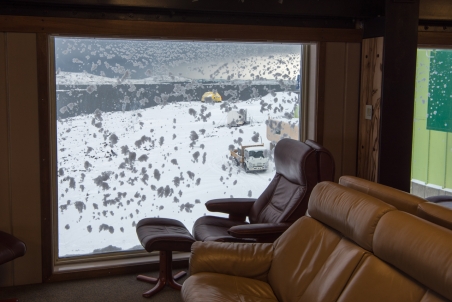 Taken from the lounge of the LQ

Looking from the beach towards Anchorage Island

Laternula shells on the beach

Elephant seals huddle together – to conserve heat and energy

Coming back from Marchents Landing

The next day (26th) the snow was still around so again I wandered around station taking more photographs.

I managed to get a close up of the Weddell seal. Also there is a photo of a young Elephant seal with a sensor (including GPS) attached to the top of his head. Seal biologists have been able to gather ongoing information on the seals movement as well as conditions in their ocean habitat. This was the subject of a great ABC story.

Elephant seal with special sensor attached to his head 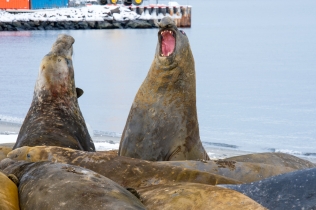 The colourful buildings of Davis Station

A different view of Davis – from the helipad

LQ lounge – view to the southwest

Over 5 days the Summer expeditioners were transported to the Aurora Australis. Only essential crew were on station until the last day (27th). The two helicopters flew out at around 1:30pm, then Psycho  (FTO) and Peter (boating co-ordinator) left the Davis wharf just after 2:00pm.

We gathered on the LQ deck at 3:30pm and lit the traditional flares to farewell the summer crew onboard the Aurora Australis as it made its way through the ice bergs in Prydz Bay.

The last of the summer crew at the helipad

Psycho and Peter leaving the Davis wharf for the AA 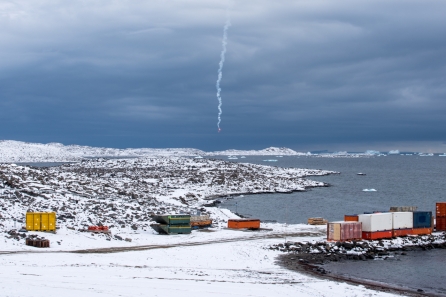 The traditional flare to farewell the AA

Later in the evening, after the AA departed,  there was another magnificent sunset.