Now there were only 17 of us left at Davis. It did not take long until we were all in our routines and planning for the up-coming winter.

Some of the big elephants seals were leaving. It is a bit of a mystery on what triggers a seal to leave – I guess the main reason is hunger. 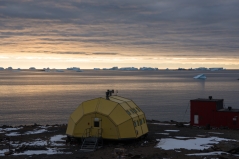 Yet another beautiful sunset

Sunset over a iceberg in front of the station

The nights were getting longer, and on the night of the 7th we had our first, highly visible aurora australis which are best seen in Polar regions of the Arctic and Antarctic.

So at around 11:30 pm I ventured out with my camera and tripod to capture this wonderful phenomena. I was pleased with the photos but in the future I would have to learn the intricate skills required to get that amazing night photo. Below are 3 examples of my first attempt.

Aurora to the west with the ‘Pineapple’ in the foreground

A fairly common atmospheric phenomena is a halo – it occurs when the light from the sun (or moon) interacts with the ice crystals in high (usually cirrus) cloud. This is the subject of the first photo below.

The rest of the photos are of the low angle of the sun and a sunset, including a mirage. 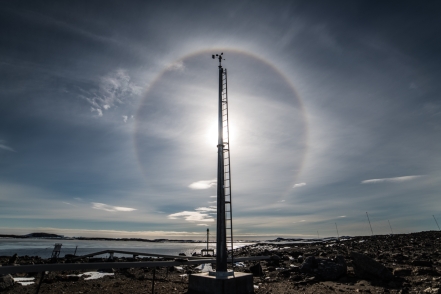 22º Circular halo using the anemometer to block out the sun

The sea ice re-forming in front of the station

Reflection of the sunset in the LQ windows

We have a brand new hydroponics building – on the 10th 0f March we christened the facility and helped plant the first crops.

Then we have an intense chess match in the LQ followed by several pictures taken just down from the Met building.

The stakes are high?

This is one of the items in the ‘Sculpture Garden’

The temperatures have started to drop with night time temperatures -10℃ to -16℃ (14 to 3℉) so we are seeing the sea ice developing and thickening. We also had another decent snow fall early on the 12th.

I went down to the beach and took these photos, plus one of the 6:15pm radiosonde wether balloon launch. 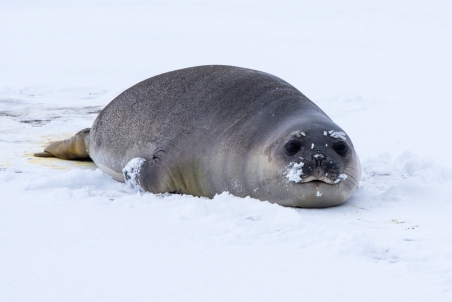 Ice forming in the bay

DK launches a weather balloon with a radiosonde attached

There was around 4cm (2 inches) of snow overnight – so the 13th was another great opportunity to capture some images of the elephant seals on the beach. The contrast in colour is amazing. Added to the spectacle was the approach from the Northeast of darkening snow laden clouds. 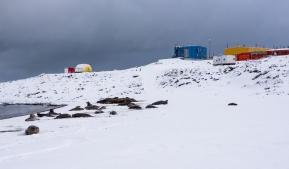 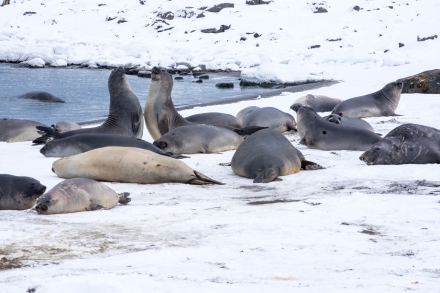 I then wandered further afield to take the following images.

from the Met building – the ‘pineapple’ on the left, then the old Met ballon shed and the old Met theodolite enclosurw

We have serious mountain bikes on station – many expeditioners used them during the summer. The first 2 pics are of Lötter riding around the pristine snow setting.

Also we decided that it would be nice to get a station group photo or 2. 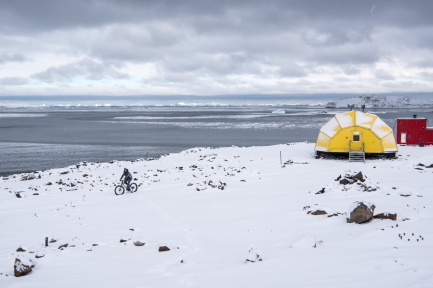 Lötter on one of the station mountain bikes 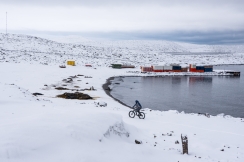 Lötter on one of the station mountain bikes

Waiting for a couple of stragglers before taking group photos 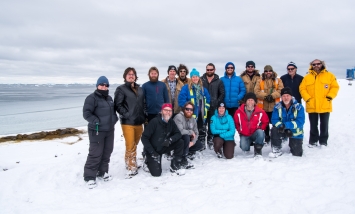 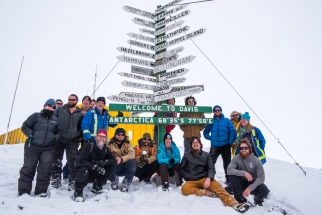 I had the dubious honour of being selected as ‘Tool of the week’ – I was presented a very special safety helmet.

Another group of adèlie penguins gathered to moult just down the hill from the old Met balloon building. 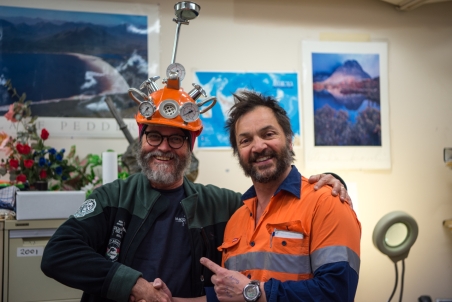 Tony (DSL) presents me with the ‘Tool of the week’ helmet

After a couple of days of snow and cooling temperatures – there was a rapid increase in the sea ice developing in the bay. 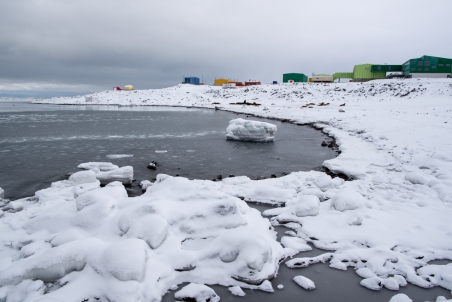 A ‘plum pudding’ with those pancakes

We celebrated the Autumn equinox – it is a day when all locations on the planet experience equal (approximately) length of day and night.

We had a few days of strong to gale force winds (20th and 21st) culminating in a wind gust of 66 knots (122 km/h, 76 miles/h) at 8:22am on the 21st. This resulted in all the loose snow being blown away and replaced by sand and dust. Again this changed the look of the station and surrounds.

Just after the strongest gust of 66 kts

Just after the strongest gust of 66 kts

All the loose snow had been blown away

Sand and dust blown over the ice and snow

The elephant seal wallow on the central part of the beach

The elephant seal wallow at the northern end of the beach

The ground at the station stripped bare of the snow

The wind and higher temperatures Glaze the ice on the beach

Early morning on both the 28th and 29th there was a strong signal for an aurora. I got up at 12:30am on the 28th and 3 am on the 29th and spent time outside taking photos of these spectacular displays of light. It gave me an opportunity to improve my skills at night photography. In saying this – some of the photos below are a little out of focus. This may be due, in part, to long exposure times of 25 sec and 30 sec. 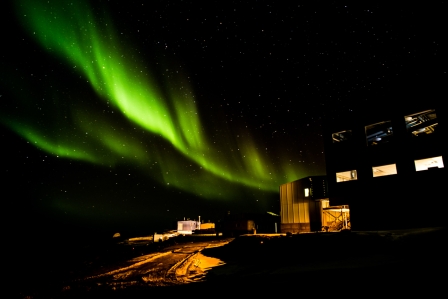 29th 2:56 am – View to the S with the Pineapple and someone with a head torch down at the wharf

29th 3:06 am – view across the station to the SSE from the launch pad of the Met building 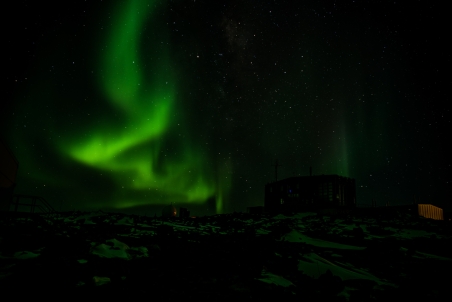 The last three photos for the month were taken at sunset, just before 7pm on the 31st. They also show how much of the snow that we had during the month has been blown away.